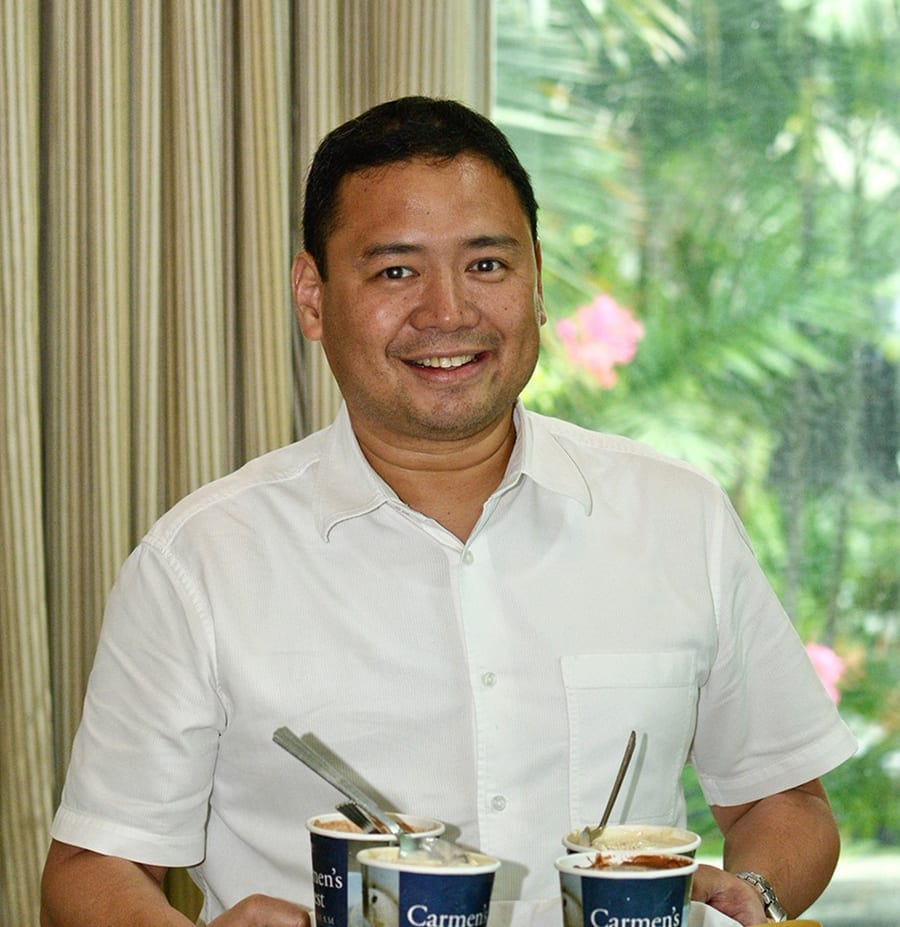 Carmen’s Best is a well-loved, high quality, premium-priced ice cream in the Philippines. CEO Paco Magsaysay, who received the Agora Awards for Entrepreneurship in 2018, shares with us how he packaged the marketing mix of Carmen’s Best to come up with a product that boasts an eager and loyal following.

Q1: What made you launch another ice cream brand in the Philippines?

A1: My father, former Senator Ramon Magsaysay, Jr. and some of his friends decided to put up a dairy farm in 2007.  This came about as the Philippines imports 99.6% of its dairy needs, and they saw prime business opportunity. The group’s intention was to sell fresh milk in the local market.

In 2008, my father asked us to come in and help sell the fresh milk, of which there was a surplus. Since dairy cows have to be milked twice a day, and we were not selling the fresh milk fast enough, there was a good amount of spoilage. As a result, we had to throw a lot of milk away.

In 2009, we incorporated a company called Carmen’s Best Dairy Products. We did this even if at the time, we still did not know yet how we were going to repurpose the fresh milk. We just knew we had a supply of fresh milk from our dairy farm to concoct products from such as flavored milk, yoghurt, cheese and so on.

After deciding that making artisanal ice cream was the way to go and going through the R&D and production process, in February 2011, we started selling Carmen’s Best Ice Cream.

Since we were committed to using the fresh milk from our dairy farm, we were limited with the amount of ice cream we could make. This meant we could not come up with a “mass” produced product.  We figured then that since we need to make our ice cream good, why not make it great?

It was this mindset that shaped and continues to define Carmen’s Best day-to-day operations and future plans. From this realization, we proceeded to design the best process to make the best ice cream, using the best ingredients.

From the outset, we were aware it was not practical to compete directly with the big ice cream manufacturers. Catering to a niche market was the wisest strategy to adopt. A discriminating sector could be counted on to seek out quality-made desserts.

Q2: Which came first – the product or the target market of Carmen’s Best? How was the market-product mix chosen?

A2: The product came first as it was a product that was conceived to solve the issue of finding use for the surplus milk, thus avoiding having to dispose of it. The market just followed as many people just started to tell their friends and family about our product. They would share pictures of them enjoying Carmen’s Best on social media.

Q3: Who were you intending as your initial target market? Was the profile of the customers according to your plan or did it evolve. How has it changed, if it has changed at all?

A3: Our initial intention was just to sell around our village, Ayala Alabang.  We were not looking to sell it outside of that area. But since beginning sales were slow, we decided to expand the distribution to outside our immediate environs.

Since then, we have encountered so many people who have tried Carmen’s Best, and we are encouraged to learn that it’s not only customers from the so-called A and B bracket who are buying our product. This is not to say that we have gone mainstream. We are still quite a niche product in terms of market penetration.

Q4: What was the thought process in coming up with the different flavors? How many did you have during launch? Which are the bestsellers?

A4: The flavors we came up with were very personal.  Almost all of them have a “backstory.” This is what makes our ice cream different. From the flavors we create, to the type of ingredients we use and ultimately, the final taste–these are based on my personal preference and no one else’s.

Our first four ice cream flavors consisted of salted caramel, butter pecan, Brazilian coffee and malted milk. Imagine, this was in February of 2011 when salted caramel, which became a “hot” flavor in succeeding years, was yet unheard of. This yummy quartet remains the top five selling flavors of Carmen’s Best, boasting a strong loyal following who, we assure, will always enjoy top quality in the ice cream they purchase.

Q5: Why did you name the ice cream after a person — Carmen, your only daughter?

The appeal wouldn’t have been the same, we feel, had the ice cream been called “Paco’s Best.”

Q6: You priced your product high. Can you share with us the thought process in your pricing decision? How do you justify high pricing?

A6: We do not believe the price of our ice cream to be “high.” It’s priced this way as production costs are high, and we don’t pump air into our ice cream.

If the big ice cream manufacturers can come up with the same quality as Carmen’s Best, and experience the same margins they are experiencing now with their ice cream, they would have come up with a competing ice cream a long time ago. The truth is–big companies will never come up with a product that will yield a low profit margin.

Q7: Where did you place your products initially? What was your distribution intent?

A7: Our first reseller was ECHO Store in Serendra as well as their franchise store in EDSA corner Quezon Avenue (ECHO Store Centris).  It just grew from there.

Q8: What kind of promotions mix (advertising, sales promotions, public relations and selling) did you use when you launched Carmen’s Best? Which proved the most effective to create sales?

A8: We didn’t advertise the traditional way. Mainly, we used social media to grow our business.  Also, since our market was quite niche, we could not use the traditional advertising platform of print, TV or radio. We relied on TV and newspaper features and interviews. We also accepted some radio interviews. In the past couple of years, we’ve been doing a lot of “talks” with various groups.

Q9: What difficulties did you encounter in the beginning and how did you solve these challenges?

A9: No one had heard of Carmen’s Best ice cream, which was expected since we were very new in the market in 2011. To offset this, we visited people, knocked on a lot of doors and offered to let people try our different flavors. Taste tests were the only way to show how different we were from our competitors.

Of course, it was a tedious process. One person and one store at a time.

But there was no other way but to work tirelessly, even on weekends–especially on weekends when customers were looking to try out something new. Our formula has always been to work when no one is looking, when the competition is sleeping or just plain outworking everyone.

But that’s our personality make up. We’re intense, which can be off putting in the Philippine setting. So, we try to diffuse this downside by smiling and cracking jokes endlessly. It’s worked so far!

Q10: You already have some retail kiosks but opened an ice cream parlor in Rockwell in 2018, adding a new channel. What is the intent of the ice cream restaurant? Will you open more of these?

In the second quarter of this year, we plan to open in Molito, Alabang, and hopefully, another store before the end of the year. We recently launched a dairy delivery service in the Makati area.

There is no recourse but to add more revenue streams for the company if we want to grow in a meaningful way. We cannot rely on just one or two revenue streams.  It’s survival of the fittest at the end of the day.

Q11: The per capita consumption of ice cream in the Philippines is closer to 1 liter a year versus about 24 liters in the U.S.. Moving forward, how are you developing the market?

We don’t expect to be a major player in terms of market share. That is not our end goal. Making the best ice cream in town…in the Philippines is. We want to educate people’s palates as what to expect when looking for excellent ice cream.

Q12: What is the vision of Carmen’s Best? Was this formulated at the start of the company or discovered along the way?

A12: The vision of Carmen’s Best is to create a small but loyal customer base in the country, and export around Southeast Asia and possibly, the Middle East. We already have a reseller in Singapore, who is reporting healthy customer uptake.

The vision was discovered as we continued to grow our business. It will certainly improve as Carmen’s Best thrives and gains more aficionados.

The Mavericks vs. The Avengers and Game of Thrones

Sat May 4 , 2019
“Want to feel inspired after the emotionally draining “The Avengers Endgame” and “Game of Thrones S8E3”? The solution may be attending the book launch of “The Mavericks: How 35 Marketing Rockstars Think, Strategize and Execute.” This was how my Facebook post read to invite people to attend the launch of my 18th book. 16 marketing mavericks joined me to share […] 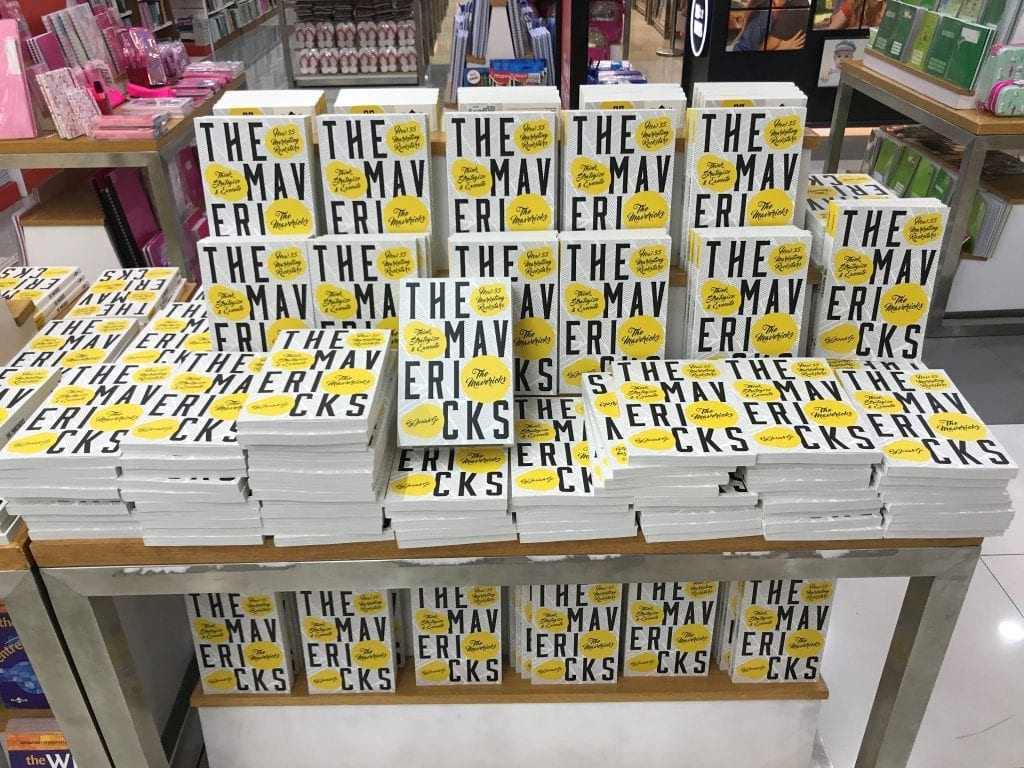