Q1: You were still young when you were tapped to head a cosmetic company (Beautifont) bought by Avon, please tell us what lessons did you learn early in your career that have influenced your subsequent ways of thinking?

A1: Beautifont was the company that Avon bought to enter the Philippines.  After a couple of years, the name Beautifont was retired in lieu of Avon.  In the 80’s, Beautifont was resurrected as a channel leverage company.  This vision behind the resurrection was to leverage the numbers of the Avon sales force by selling products that were not necessarily related to beauty.  By using Beautifont, the beauty image of Avon would not be tarnished.

The resurrected Beautifont was originally manned by Avon personnel, myself included.  It was small (10pax) but cost structure was high because we were paid multinational wage levels.

As Avon New York at that time was busy fending off unwanted takeover attempts, we never received our capitalization.  We were running on borrowed money from banks.  It is extremely difficult to be profitable when your interest rate is 18% and higher.  In truth I was working for the banks not for Beautifont.

As such my key learning was cash is king.  No cash flow.  No business.  We learned how to collect receivables immediately and stretch payment of payables.

My other key learning is the power of encouraging the heart.  I was extremely vulnerable regarding personnel.  People knew cash was an issue.  People knew sustainability was an issue and I was working with Avon hot shots who were risk takers.  I was extremely vulnerable to defections.  But by building pride in our organization, by building teamwork, we achieved great results and most stayed with Beautifont until the day it was folded into Avon (4 years).  Many at the time decided not to go back to Avon but moved on to be department heads or CEOs of other direct selling companies.  3 left Beautifont to go on as CEOs.  I am a proud mama.

Q2: Afterwards, you were promoted from VP-sales to general manager of Avon in the Philippines, one of the top 10 countries of Avon worldwide.  Other than the wide range of products, what made Avon grow to be such a dominant force in direct selling in the Philippines?

A2: We grew the sales force.  Recruit Recruit Recruit.  By the time I left the Philippines we grew that registered sales force from a plateau of 22,000 dealers to 200,000 dealers.  This took a tremendous amount of backroom catch up.  More branches and service centers to facilitate recruitment.  Painful upgrades in operations and MIS.  Organizational reconfigurations.  And great teamwork and pride.  It was during this time that Avon won the Asian Wall Street Journal Employer of the Year.  Results? Although my people were exhausted they were proud!  We rated so low in terms of work life balance. But high in all the other measurements.

Q3: When you were President DIRECTOR of Avon in Indonesia in the late 1990’s, the rupiah devaluated most compared with other Asian currencies.  Those were real hard times for many businesses, yet you led the company to survive and win many awards.  Please tell us about this interesting phase in your international career. What were your insights that you gained at that time and what actions did you take then that made a big difference for the company and the people working for you?

A3: We focused on cash flow.  For the first time in the history of Avon Indonesia, we were able to remit cash to New York in the 1st quarter of the year which is traditionally a cash strapped quarter.

We focused on selling.  The opportunity was that prestige brands were no longer affordable but a woman’s need to be beautiful remained.  So we targeted that customer.  Everyone but everyone had to sell.  Factory line workers had goals.  Office staff had goals.

I am proud to say we did not lay off any permanent employees.

Q4: You also had a stint as Executive Director for business development in Asia for Avon, what was your job like then?

A4:  I was in charge of opening new markets in Asia.  I looked at Vietnam, Myanmar, Cambodia, and Laos.  After analysis, we proceeded to open Vietnam.  I was also in charge of rejuvenating sales structures and models around Asia Pacific.  The job required a lot of travel, working with government and lawyers and the Avon Asia Pacific companies

Q5: You retired a few years ago during the height of your career to enjoy ballroom dancing and not a few would be taken aback with your early retirement.  There must have been some life-changing circumstances that made you give up a rewarding career and decide to dance everyday and reach international competitive levels. Can you share with us your insight on life and work balance?

A5:  I lost the passion.  Regional work sounds exciting but it’s tiring and it takes a toll on your family life.  I also watched my bosses struggle with “forced” retirement and my regional boss struggle when his wife was diagnosed with cancer and he had difficulty dealing with her needs and the time required for work.  I asked myself “Is this what you want?  This is your next step”.  I decided that I wanted to retire young enough to be able to build another life.

So I told my boss a year in advance I will retire but he said it was mid life crisis.  Perhaps.  But after a year when he wouldn’t issue an announcement a month before my retirement, I personally wrote the chairman I was retiring.  I went to interior design school and started to dance seriously.  I was unable to finish my interior design course because I was diagnosed with cancer.  In retrospect, I think I would have been a goner if I had stayed at Avon because I would always delay my checkups because “I didn’t have time”

Q6: You also turned entrepreneurial and put up a Hainanese chicken kiosk at the Legaspi Sunday market with your husband Luie, and it’s been doing so well (for me, it is indeed one of the better quality Hainanese chicken I have ever tried). What was your reaction when your friends would tell you ‘Malu, you retired to sell chicken?’ How important is personal freedom to you?

A6: It was my former boss from an advertising agency who said “You gave up your corporate career to be a tindera!!!”  My answer was “actually I’m the kusinera” I think my husband had a harder time accepting those comments.  When people would ask he would say “because we need the money”.  One day a friend texted to tell me to tell him to stop saying that.  After we talked I realized he didn’t know what to say and he couldn’t say ‘because my wife forced me to”. (Which is the truth) but now he’s truly enjoying the market. When we started selling there we would sell 16 serves.  Now our record is close 140 serves.

Q7: You survived breast cancer before, though it has recurred last year.  Your journey has been an inspiration as you continue to be active and positive.  Can you share with our readers how you survived this challenging phase of your life?

A7: The first time I was clueless.  I just kept going.  I couldn’t go to school because my immune system couldn’t take the germs from an enclosed classroom but I kept practicing for competitions in dance sport.  I wasn’t very good but I kept going.

The second time was more difficult.  I was no longer clueless.  And this time I lost my breast.  I am a woman who would wear plunging necklines.  Well not anymore.  And I can’t have reconstructive surgery because of the damage caused to my skin during radiation from my first bout. We tried but had to remove the implant.

I just try to keep a sense of humor (my prosthesis has popped out a couple of times while I was dancing) and to focus on other things.  I have the gene that feeds the cancer in my body so I expect it will return once more.  I am also not above using my condition to my advantage.  If I’m losing an argument, my last card is “don’t harass me, I’m a cancer patient’

Q8: There is a book entitled “The Strategist”, which noted how purpose can change a company’s direction.  Can you share with us what you feel is your life’s purpose.

A8: I’m not Steve Jobs or someone of that stature, but I do believe in being the best I can be. When I was offered the position of sales & operations at Avon, I was a through and through marketing person.  But I was told, if you want to head up Avon, you need sales experience.  So I accepted and told myself ‘just do your best.  You don’t have to be the best” and it turned out my best was world class.

It’s the same in dance sport competitions.  I dance against myself.  My prayer before we step on the floor is ‘Lord, help me to dance at my personal best’.  And my best is also turning out to be world class.

If you try to continually be at your best, and to beat your best, you became resilient.  What you achieve is due to the effort you put into the endeavor.  No one else.  It’s your victory and your loss.

One thought on “Q&A with Malu Dybuncio on Managing in Times of Crisis, and Shifting from Executive to Entrepreneur”

Tue Jul 1 , 2014
Q1: Congratulations on your leading Yellow Boat of Hope Foundation (YBHF), which started as the Zamboanga Fund for Little Kids, can you share a brief history how this boat advocacy was born? This boat advocacy started when Juljimar Gonzales shared the story of how he saw a group of kids at Layag Layag with one hand holding a plastic bag and another […] 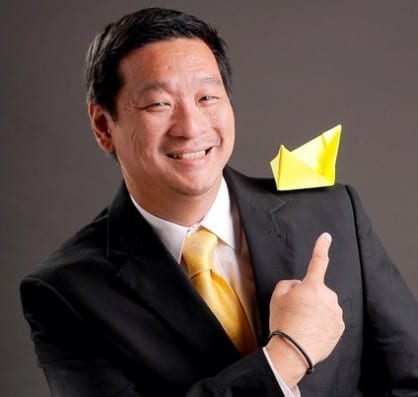